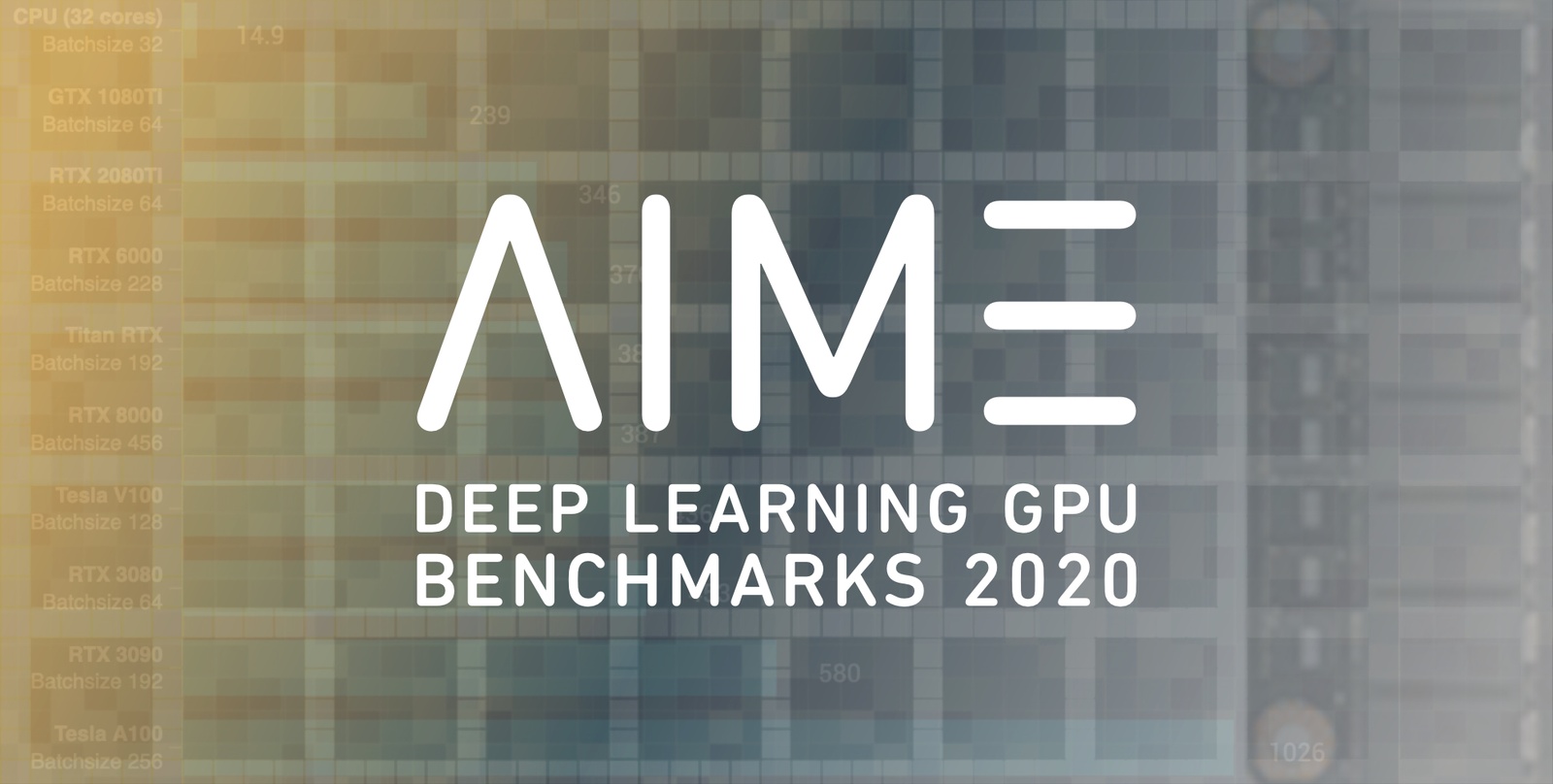 An overview of current high end GPUs and compute accelerators best for deep and machine learning tasks. Included are the latest offerings from NVIDIA: the Ampere GPU generation. Also the performance of multi GPU setups like a quad RTX 3090 configuration is evaluated.

Although we only tested a small selection of all the available GPUs, we think we covered all GPUs that are currently best suited for deep learning training and development due to their compute and memory capabilities and their compatibility to current deep learning frameworks.

One of the most important setting to optimize the workload for each type of GPU is to use the optimal batch size. The batch size specifies how many propagations of the network are done in parallel, the results of each propagation are averaged among the batch and then the result is applied to adjust the weights of the network. The best batch size in regards of performance is directly related to the amount of GPU memory available.

A Tensorflow performance feature that was declared stable a while ago, but is still by default turned off is XLA (Accelerated Linear Algebra). It does optimization on the network graph by dynamically compiling parts of the network to specific kernels optimized for the specific device. This can have performance benefits of 10% to 30% compared to the static crafted Tensorflow kernels for different layer types.

Concerning inference jobs, a lower floating point precision and even lower 8 or 4 bit integer resolution is granted and used to improve performance. For most training situation float 16bit precision can also be applied for training tasks with neglectable loss in training accuracy and can speed-up training jobs dramatically. Applying float 16bit precision is not that trivial as the model has to be adjusted to use it. As not all calculation steps should be done with a lower bit precision, the mixing of different bit resolutions for calculation is referred as "mixed precision".

The visual recognition ResNet50 model in version 1.0 is used for our benchmark. As the classic deep learning network with its complex 50 layer architecture with different convolutional and residual layers, it is still a good network for comparing achievable deep learning performance. As it is used in many benchmarks, a close to optimal implementation is available, driving the GPU to maximum performance and showing where the performance limits of the devices are.

We used our AIME A4000 server for testing. It is an elaborated environment to run high performance multiple GPUs by providing optimal cooling and the availability to run each GPU in a PCIe 4.0 x16 slot directly connected to the CPU.

The NVIDIA Ampere generation benefits from the PCIe 4.0 capability, it doubles the data transfer rates to 31.5 GB/s to the CPU and between the GPUs.

The connectivity has a measurable influence to the deep learning performance, especially in multi GPU configurations.

Also the AIME A4000 provides sophisticated cooling which is necessary to achieve and hold maximum performance.

The results of our measurements is the average image per second that could be trained while running for 100 batches at the specified batch size.

The NVIDIA Ampere generation is clearly leading the field, with the A100 declassifying all other models.

When training with float 16bit precision the compute accelerators A100 and V100 increase their lead. But also the RTX 3090 can more than double its performance in comparison to float 32 bit calculations.

The GPU speed-up compared to a CPU rises here to 167x the speed of a 32 core CPU, making GPU computing not only feasible but mandatory for high performance deep learning tasks.

The next level of deep learning performance is to distribute the work and training loads across multiple GPUs. The AIME A4000 does support up to 4 GPUs of any type.

Deep learning does scale well across multiple GPUs. The method of choice for multi GPU scaling in at least 90% the cases is to spread the batch across the GPUs. Therefore the effective batch size is the sum of the batch size of each GPU in use.

With the AIME A4000 a good scale factor of 0.88 is reached, so each additional GPU adds about 88% of its possible performance to the total performance

This shows that the correct setup can change the duration of a training task from weeks to a single day or even just hours. In most cases a training time allowing to run the training over night to have the results the next morning is probably desired.

A feature definitely worth a look in regards of performance is to switch training from float 32 precision to mixed precision training. Getting a performance boost by adjusting software depending on your constraints could probably be a very efficient move to double the performance.

Deep Learning performance scaling with multi GPUs scales well for at least up to 4 GPUs: 2 GPUs can often outperform the next more powerful GPU in regards of price and performance.

As in most cases there is not a simple answer to the question. Performance is for sure the most important aspect of a GPU used for deep learning tasks but not the only one.

It delivers the most bang for the buck. If you are looking for a price-conscious solution, a 4 GPU setup can play in the high-end league with the acquisition costs of less than a single most high-end GPU.

But be aware of the step back in available GPU memory, as the RTX 3080 has 1 GB less memory then the long time 11 GB memory configuration of the GTX 1080 TI and RTX 2080 TI. This probably leads to the necessity to reduce the default batch size of many applications.

Maybe there will be RTX 3080 TI which fixes this bottleneck?

The RTX 3090 is currently the real step up from the RTX 2080 TI. With its sophisticated 24 GB memory and a clear performance increase to the RTX 2080 TI it sets the margin for this generation of deep learning GPUs.

A double RTX 3090 setup can outperform a 4 x RTX 2080 TI setup in deep learning turn around times, with less power demand and with a lower price tag.

The A100 made a big performance improvement compared to the Tesla V100 which makes the price / performance ratio become much more feasible.

Also the lower power consumption of 250 Watt compared to the 700 Watt of a dual RTX 3090 setup with comparable performance reaches a range where under sustained full load the difference in energy costs might become a factor to consider.

Moreover, concerning solutions with the need of virtualization to run under a Hypervisor, for example for cloud renting services, it is currently the best choice for high-end deep learning training tasks.

A quad NVIDIA A100 setup, like possible with the AIME A4000, catapults one into the petaFLOPS HPC computing area.